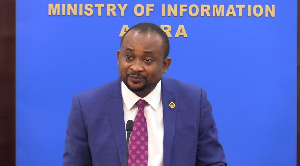 Mark Agyean, the Technical Manager for PIAC, told the media after a meeting with Finance minister Ken Ofori-Atta on the controversial deal that the government had agreed to suspend the arrangement for broader consultation with all stakeholders.

But speaking on the Morning Starr Thursday, the deputy minister said government is willing to share information on areas that appear unclear to the public and still go ahead with the deal.

“The brief that I have is that government still is engaging CSOs to give them better clarity. The fundamental misunderstanding and misconceptions are being clarified. The CSOs engaged with the Finance Ministry and my understanding is that some clarity has been given. After the meeting, I heard Franklin Cudjoe describing the deal as a good deal,” he told host Francis Abban.

Meanwhile, flagbearer of the National Democratic Congress (NDC), John Mahama, has reiterated his decision not to respect the Agyapa Mineral Royalties agreement if he becomes president.

He says he will abrogate the agreement and has therefore urged government to desist from signing the deal.

Addressing the chiefs and people of Kaleo, as part of his tour of the Upper West Region, Mr. Mahama said the attempt by government spokespersons to justify the Agyapa deal in the name of a 2011 proposed Ghana Gold Company is both inaccurate and disingenuous.

He said the proposed company was 100% was intended to be owned by government and the people of Ghana, adding that it had no planned secret beneficial owners.

The former President pointed out that the Agyapa deal is shrouded in secrecy, its beneficial owners are unknown, and it seeks to “monetise Ghana’s gold royalties for the next 15 years and even in perpetuity without the consent of the people of Ghana”.

He added “civil society and right-thinking Ghanaians have all expressed misgivings about this Agyapa deal”.