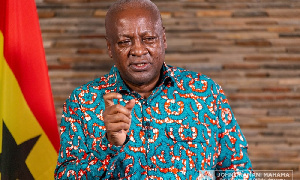 Flagbearer of the National Democratic Congress (NDC), John Dramani Mahama has said government wouldn’t have had to introduce the current double track system and struggle with its implementation if President Nana Akufo-Addo and his administration had applied common sense during the planning stages of the Free Senior High School policy.

According to him, the ruling government could have completed the 200 community day schools which the NDC commenced during their tenure of office to solve the challenges fraught with the double-track system which is currently running in Senior High Schools.

“Our Constitution says that any government that takes over from a preceding government must continue the programmes and projects of the government that it took over from…And if the Nana Akufo-Addo administration used planning and common sense, then what they should have done was to take the 200 new community day schools and fast-track and finish them so that we will not have the double-track that we are currently going through”, Mr Mahama said when he paid a courtesy call on ManWe Naa on Thursday, September 3.

The NDC flagbearer promised to complete the 200 community day school projects when he’s voted back into power in the upcoming December polls to solve the issue of the double-track system in second cycle institutions.

He explained that the NDC started free SHS in 2015 with just day students and because of the overwhelming numbers recorded at the time, government decided to build the community day schools to eradicate the menace.

Former President Mahama said, “We cancelled all school fees for children who were day students in senior high school and in 2016, we enrolled 140,000 boarding students on the bursary system but we knew that with the implementation of free SHS, there was going to be an increase in the number of children coming to secondary school and, so, from 2015, we started an aggressive policy of increasing and expanding the infrastructure in the existing secondary schools but we realised that however much we expanded the infrastructure, the children were going to overwhelm the existing secondary schools”.

“So, we said ‘OK, let’s build 200 new secondary schools so that all the children can have access to secondary school education’, and that is why we started all these community day schools,” he added.

But the NPP government abandoned these developmental projects when they came into office, Mahama stressed.

He also promised to fix the gaps in the Free SHS policy to make it work better.

WASHINGTON — President Vladimir V. Putin of Russia is most likely continuing to approve and direct interference operations aimed at