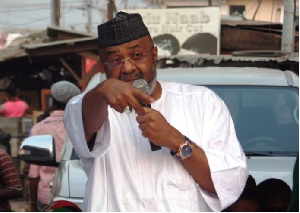 Former Ghana Ambassador to Saudi Arabia and National Vice Chairman of the Opposition National Democratic Congress (NDC), Alhaji Said Sinare, has urged members of his party to go out in their numbers on elecytion day to ‘police’ ballot boxes.

He indicated the ruling New Patriotic Party (NPP) is likely to adopt foul means to manipulate the December elections results, calling on the youth to be extra vigilant on the day of polls to ensure that the ballots cast are counted fairly.

“We will match the NPP boot for boot,” Alhaji Sinare stated on Inside Politics on Power 97.9 FM adding that he will personally be out to secure ballots cast in the NDC’s favour.

Speaking on Inside Politics hosted by Mugabe Maase on Power 97.9 FM, the former Ghana’s High Commissioner to Saudi Arabia disclosed that the NDC.”

“I will be a polling agent on election day,” he told host Mugabe Maase and advised other senior officers of the party to do same to ensure the verdict of the polls was not diverted.

“Apart from the [party’s] polling agents, we should not have less than 50 strong NDC members who’ll be there [at the polling centres] and be watching. We’ll match them boot for boot,” Alhaji Sinare noted.

He also said the second area the NDC will focus on on the election day will be the district and regional collation centres of the Electoral Commission (EC) across the country to secure results that will be transmitted from polling stations are fully secured.

To him, the elections will have to be monitored extensively to safeguard the results because all indicators showed that the NDC’s flagbearer, John Dramani Mahama, has won the hearts of Ghanaians, following the abysmal performance of the Akufo-Addo government in almost all sectors of the economy.

The victory of the congress at the polls, he noted was a shared responsibility of all NDC members and stressed that dedicating one’s time to “police” ballot boxes for a day to ensure his or her party is fairly re-elected was a good cause.