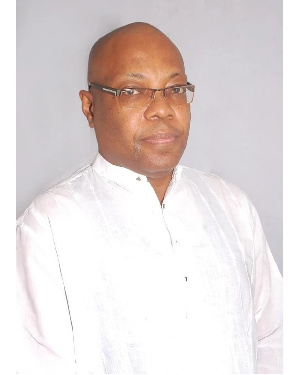 Youth unemployment, which has been a bane for successive governments and to the La Dadekotopon Constituency in particular, over the years, will be a thing of the past.

This canker, according Michel Bowman Amuah, an independent candidate contesting the parliamentary seat in La Dadekotopon, will be overturned should he win on December 7.

In an exclusive interview with Pulse Ghana, the Electronic Systems Engineer said he will create a minimum of 100,000 jobs for indigenes in the constituency.

“Our goal is to make sure that unless everybody in La is employed or fully employed; we won’t open up these jobs to anybody else because the jobs are primarily for the residents and indigenes of the constituency”, Mr. Amuah said.

To further explain his plan for the total overhaul of the unemployment situation for the people of La, Michel Amuah said he will embark on investing directly in the people.

“We are going to make direct investment in the people. That’s the key. A lot of people talk about jobs and so on and so forth and some people are successful in bringing in a company here or a company there, but if you don’t have people with the right skills or skills at all to be able to do these jobs in the community; then these jobs no longer belong to the people.”

Though Michel Bowman Amuah is contesting the Dadekotopon seat for the first time, he has a great deal of political exposure both in Ghana and in the United States of America.

He honed his political skills and dynamism as part of the volunteering team for Barack Obama’s 2004 senate campaign in Chicago, Illinois.

It is on this experience that his campaign is focusing on the mantra Obama used in 2008: hope. He said people in the La Dadekotopon Constituency are hopeless because they have been deceived for long by the two main political parties.

He contends that candidates of both the National Democratic Congress (NDC) and the New Patriotic Party (NPP) have taken turns and deceived the people with promises that they haven’t been able to fulfill over the years.

“I call it the same coin but different sides. For 28 years we have not accomplished anything in the constituency. The fact is that La Dadekotopon has gone backwards.”

On how he intends to fix the hopeless situation? He said: “You want to give hope by actually giving pragmatic solutions to problems. The biggest issue is there are people in the constituency who don’t have hope because they don’t have incomes so they have to survive by their wits and sometimes by begging.”

In order not to chart the course of most politicians in the country in regards to unfulfilled promises, Michel Bowman says he is ready to sign a social contract with the people of Dadekotopon to which they can take him up if he fails to deliver.

He also plans to serve for only three and half years as Member of Parliament should he win. Mr. Amuah said: “I personally plan on being there for 3 and half years and then I will the capacity of various members of my team to succeed me. I will be grooming people who will ready in three and half years to take over from me and continue the works I have done for the next generation”.