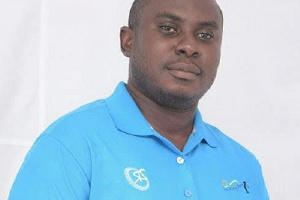 AFA recently named a seven-member Media Committee to spearhead the promotion and publicity drive of the sport on the continent and beyond.

After initial discussions among the Executive Board Members of AFA, they settled on the former Press Officer of the Ghana Olympic Committee (GOC) to chair the media committee.

In response to his new challenge, ‘Ken’ as he is affectionately called thanked members of the AFA board for the confidence reposed in him and assured them of his maximum best to implement the task ahead.

He also thanked members of the committee for accepting to work with him as the chair and urged them to work in unity since they have a common goal of promoting and making arm wrestling one of the most popular sport if not the popular sport on the continent.

“Let me also thanked the Ghana Armwrestling Federation (GAF) for believing in my competence and nominating me to the continental body and I know this is just the beginning of greater things for us to do because I have been part of the GAF family since day one and we have achieved a lot together. I am grateful to the President, Mr Charles Osei Asibey and the Vice Mr Kofi Addo Agyekkum,” he mentioned.

Ken was instrumental in Ghana’s successful hosting of the 2018 Africa Armwrestling Championship when he was appointed as Head of Operations and Media for the event. His dedication and commitment to the glamourous event earned the praise of the Secretary General of the World Armwrestling Federation who tipped Ghana to soon host a world championship

He has a B.A and Diploma in Communication Studies from the Ghana Institute of Journalism and currently pursuing a Master’s Degree in Global Sport Management at the Seoul National University.

He has also been involved with some Sports Bodies and other organisations serving in different capacities.