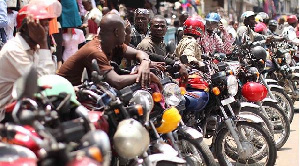 A group of Okada riders in Accra Central waiting for clients.

Some commercial motorbike (okada) riders in Accra have welcomed the promise by the flagbearer of the opposition National Democratic Congress (NDC), John Mahama, to legalize their business when voted into office.

The riders who believe their job is lucrative than most government works in the country, noted that they will do everything to campaign for the NDC to be elected so their work can be without “unnecessary police confrontation.”

To them, legalizing their trade will be a dream come through since the business is very lucrative albeit intermittent police arrests.

Former President and flagbearer of the National Democratic Congress (NDC), John Dramani Mahama, told the people of Kpando in the Volta Region that he will legalize the Okada business if Ghanaians win the December 7, 2020 polls.

He said he has seen many of the young people who have finished school and can’t find a job ride motorcycles and transport people from place to place for a fee to cater for themselves.

“But in our law, it says Okada is illegal but Okada is a reality, it has come to stay, you can’t stop it, and, so, I’ve suggested and I say when we come into office, we will legalize Okada but we will regulate it”, Mr Mahama assured.

Following the promise from the NDC flagbearer, the okada riders in the Greater Accra and elsewhere in the country have not hidden their joy.

Kwasi Twumasi, a 35 year old father of two (2) and resident of Kasoa, who spoke to Power News could not hide his excitement after hearing Mr Mahama’s pledge to legalize his business which earns him between GH¢100 and GH¢250.

“I am not the only person who is excited. Our colleagues, including those who belong to the NPP have all welcomed the promise and can’t wait for Mahama to win,” he said.

Although they are aware of the risk nature of their job, most of them are willing to be trained when the business is legalized.

“See, I know a few of my colleagues who have completed Polytechnics and some trainee institutions who have not been posted but happy doing okada business here in Accra. We are happy doing this work because a government work doesn’t pay well like what we receive here,” Mr Twumasi revealed.

Most of his colleagues who have bought other motorbikes from their profits have planned sparing some time to campaign for John Mahama, according to Twumasi who has also planned to campaign for the NDC.

Meanwhile, a deputy spokesperson for the John Mahama 2020 campaign, Margaret Ansei has slammed critics against the legalization of okada, saying it is economically viable.

This is after the okada business, that has created jobs for thousands of young men across the country particularly in Accra and Tamale, has been condemned by the ruling New Patriotic Party (NPP) communicators who argue that legalizing the business will increase road accidents among motorists.

But Madam Ansei who was reacting to her political opponents, on Power FM’s Dwaboase current affairs programme hosted by Kwame Minkah, noted that the next NDC government has a fair appreciation of the sector and its contribution to the economy of the country than the NPP spokespersons thought.

Magoo, a former MCE for Suhum Municipality, stressed that okada business is an avenue to create decent jobs for young men who have no access to jobs under the Akufo-Addo government “which promised so much jobs but have delivered a handful.”

Explaining that an NDC government will initiate processes to amend the laws that prohibits okada business when given the mandate, Madam Ansei stated that there were plans to give the riders vigorous training to riders to enable them adhere to safety precautions and to avert accidents.

She observed that although the activity is illegal, persons who are into okada businesses do not operate safely thereby causing the lives of people.

“Currently, they [the riders] don’t obey all the traffic regulations in order to be safe, however, when we train them and regulate their businesses they will be able to do their job safely and earn decent income,” Magoo assured on Wednesday.

To her, the NPP spokespersons were kicking against the policy because they realized the thousands of okada riders had welcomed the promise and were mobilizing to get their colleagues to vote for the NDC in the upcoming polls to put a stop to the harassment they are faced with from Police officers on daily basis.