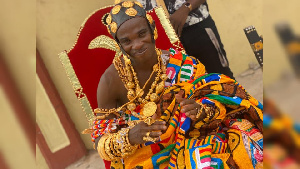 In the last couple of days, there has been furor about UN awards under the auspices of Global Public Excellence where top politicians, journalists and celebrities were honored.

The award scheme has been anchored by a certain Dr Kwame O. Fordjour.

MyNewsGh.com went into the social media page of the organization and discovered an interesting profile of the Executive who prides himself on holding an enviable position in the United Nations.

For the benefit of our readers, we reproduce the unedited version blow.

As one of the Pioneering Achievers of Africa’s Global Leadership Legacy, He was poached by the 7th UN Secretary General Kofi Annan to the projection of African Foreign Service to the Globe articulating inter Countries’ achievements to the best of Global Representation and Practices especially the United Nations Millennium Declaration that saw Member States Declaring to Achieve the Internationally Agreed Goals where he was assigned by Former UN Secretary General Kofi Annan to Monitor and Assess Governments according to Africans’ present State and Governance.

As a Millennium Ambassador, he was appointed amongst ‘Good Leaders’ in the capacities of ‘Royal Majesties’ and ‘Heads of State’ in Policy-making and enshrining the 8 postulates into National Constitutions for replicable practices and making Governments accountable to its Citizens as well as their peer review.

Dr. Fordjour has been working with the United Nations after his graduation from Harvard Kennedy school under Special Agency duties for the Secretary-General, embarking on Global Research and Governmental Cooperation for Global Development and the World we want in the United Nations Reformation to transform the World.

The numerous researches and achievements got Ambassador recommended to underscore the initiatives of the Secretary-General as part of the Architects of Global Goals. These initiatives included The World Global Ball, checkmating Innovative Developments for Secretary General’s conferment of Honorary Excellence award on Achievers, Performers and Unifiers of the Globe in Service to Humanity.

Ambassador Dr. Kwame Fordjour on the Global Mission was host to the Presidential Global Ball and Global Diplomacy Honours of Member States of the United Nations.

Between 2006 and 2015 Dr. Fordjour led an intense Global Public Excellence Challenge and competition on Leaders of which he was applauded by President George W. Bush as Governments were struggling for a place in the Global Governance Companion and rank on the Global Achievements which enhanced the UN MDGS achievements including Universal Health Delivery, universal Education, Global Security etc.)

As part of the full Global Interactions, Inter Governmental Researches and reports of the Globe on each region of the World spearheaded by Ambassador Dr. Kwame Fordjour ‘s Group, Former Secretary-General institutionalized the Global Public Excellence to award (yearly) World Excellence in which Amb. Dr. Fordjour was honoured to Chair in Africa which needed Global Excellence by practices and Exemplary Leadership.

He was part of the Kofi Annan’s Road to Peace Achievement, Rule of Law Programme, Democratic, Governance and Humanitarian Services Assignments.

Dr. Fordjour was endorsed UNITED NATIONS GOLD STAR by His Excellency Kofi Annan and the Panel of World Leaders on Global Diplomacy and Innovations which embraces Icons from Countries for Global Mobilization to champion Development.

Over 198 Member States of the United Nations past and present have experienced and endorsed H. E. Fordjour’s contribution to Global Development and impact.

Dr. Kwame Fordjour is the current Global Chair under UNSG of the United Nations Blueprint mission of Excellence, celebrating Global Performances of Global Public and Governments in innovation. Also, ceremonial Honour to the United Nations Secretary-General for his Global Achievements and Mission, accumulation of Achievements to award the exciting, intriguing, and toppling Excellence moments.

Dr. Fordjour’s mission is to capture the Global Intellectual Thinkers and Actors, innovative and creative Leaders to achieve the General Assembly’s Resolution 77/1 and turn the next Generation into First Class Global Citizens of equal and equitable access to the World.

H.E. FORDJOUR pursued his first Degree at Kwame Nkrumah University of Science and Technology, Kumasi, Ghana where he successfully gained distinction in BA (Hons) Social Sciences. He then attended Sussex University, United Kingdom to read International Relations and completed in 2005.

In 2006 Ambassador Dr. Kwame Fordjour (Wayne Winston) pursued PhD in Global Studies and International Development at Kennedy School at Harvard University, Massachusetts in USA where he successfully gained distinction in 2010.