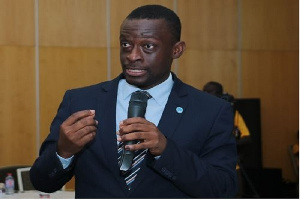 The MP for Tarkwa Nsuaem, George Mireku Duker, and the Western Regional Minister, Kobby Okyere Darko-Mensah, have come under fire in the region for meddling in chieftaincy dispute that has turned bloody at Dompem Pepesa in the Tarkwa-Nsuaem Constituency.

The MP and MCE for Tarkwa-Nsuaem, Benjamin Kessie, according to sources, have been at the centre of the chieftaincy dispute that is seeking to evict an illegal chief from the Pepesa Palace.

According to the Kingmakers in the area, Mireku Duker backed some people to enstool the illegal chief Bafour Awuah Kwapaa 2 years ago, leading to a Takoradi High Court order asking the occupant of the stool to vacate the palace.

Enforcing the court order last weekend, Bafour Awuah Kwapaa, the self imposed chief at Pepesa with a stool name Ohyeawora Bian Nyonwa IV and a friend to Mr Mireku Duker with the backing of the MCE in the area, allegedly set ablaze the Chief Palace over the weekend when police officers stormed the palace.

He is said to have fired gunshots at the police officers and set the palace ablaze Friday and flee from the area.

“When the police brought the eviction notice, he retaliated with gun shots and set the palace ablaze, and jumped through the window to escape. The Hon MP George Mireku Duker and The Hon MCE Bejamin Kessie were seen in a video arguing strongly and obstructing the police from performing their duty,” Nana Nkrumahkyi II said.

Supporters of the Baffour Awuah has since been attacking family members of the new chief while the MP prevents police officers in the area from enforcing the laws in the area.

Nana Nkrumahkyi went on to narrate how the MP aided the enstoolment of Baffour Awuah Kwapaa on the blind side of the Abusuapanyin 2 years ago despite red flags from the people.

Below is his press release;

We are meeting the media this afternoon on the following issues:

(1). The whole thing started when the ex-chief, Nana Kwaku Nkrumah IV was in power. There arose a misunderstanding between the ex-chief, Nana Kwaku Nkrumah IV and his kingmakers. The kingmakers were asking him to step down and the chief also asked the kingmakers to step down. This matter was taken to the Traditional Council. The council ruled in favour of the kingmakers (See exhibit ‘A’ ) asking the kingmakers to go back to their posts. Before then, the chief had appointed representatives to hold the fort until the matter was resolved. The chief, not satisfied with the ruling sent the case to the high court.

But when he noticed that a ‘contempt’ would be cited against him, he sat down with the kingmakers to an agreement. The chief therefore asked those who had been asked to hold the fort in the interim to go back. (See Exhibit B)

The chief later abdicated from the stool. This was in the absence of the Abusua Panyin. The kingmakers were therefore waiting for the Abusua Panyin to return in order for a new chief to be traditionally enstooled. But before they could notice, the MP George Mireku Duker and his grand father had tacitly enstooled one Bafour Awuah Kwapaa, as chief with the stool name Ohyeawora Bian Nyonwa IV. When the Abusua Panyin arrived he, noticing that Kwapaa was not a true royal, and did not qualify to be chief of Dompem Pepesa, together with the kingmakers, made a declaration at the Tarkwa high Court against that enstoolement, that his enstoolment was improper, non tradtional and illegal and that no one should recognize him as chief of Dompim. (See Exhibit C). This, Kwapaa did not respond to.

The Abusua Panyin and the Kingmakers, and the Queen mother, following the tradition of Wasa Fiase, enstooled a new legal and substantive chief from the rightful gate.

Kwaapaa was still styling himself up as the chief of Dompim Pepesa, and so it was assumed that there were two chiefs in Dompim Pepesa, and this went to the notice of the Traditional Council. The two Parties were invited by the council under the jurisdiction of the Arbitration Committee.

Kwaapaa, not satisfied with the ruling, sent it to the Judicial Committee of the Wasa Fiase Tradtional Area. And the Committee ruled in favour of the new chief. (See exhibit E)

Again, he sent this same case to the Sekondi High Court, and again, the High Court ruled in favour the new chief. (See Exhibit F)

Later, he applied for an injunction against the gazette of the new chief. This was over ruled by the Sekondi High Court. (See Exhibit G). Again he applied for a stay of execution, but he later withdrew from the court, accepting therefore that he was not the chief of Dompim Pepesa.

Despite all these, Kwaapaa has defied the orders of the court and continued to remain and manage to convince the town that he was still the chief. This, he’s been doing with the support of the Honourable MP George Mireku Duker and MCE Hon. Benjamin Kessie.

An order was therefore granted us by the Court of Jurisdiction empowering the police to evict this notorious self-styled chief.

When the police brought the eviction notice, he retaliated with gun shots and set the palace ablaze, and jumped through the window to escape. The Hon MP George Mireku Duker and The Hon MCE Bejamin Kessie were seen in a video arguing strongly and obstructing the police from performing their duty

(2). We’ve been through all hooliganism, vandalization and brutalities meted out by the illegal chief (Kwaapaa or Ohyeawora) and his followers but Nana Nyonwa Panyin the IV and the Pepesaman have been patient all this while and have come to appoint that a competent court of jurisdiction has given an order that the purported chief who styles himself as Ohyeawora Bian Nyonwa, and was enstooled by Hon. George Mireku Duker, be moved from the palace, which the police carried out. The MP Hon George Mireku Duker, the MCE Hon. Benjamin Kessie teamed up and stood against this court order, saying their government is in power and that they are in-charge of security in the area and that ‘this matter will not rest’.

Even though there is an order from the court of jurisdiction to evict the purported chief, they will not allow him to move out of the palace and will do everything in their power to prevent his removal. On Thursday 27th August, 2020 the MCE sent a troupe of military men to the town under the pretense that they were in to keep peace. While the MCE was talking on the local FM preaching peace, his boys took advantage of the presence of the Military and entered into people’s premises and looted and vandalized their houses and stores. This was actually a calculated attempt at sabotaging the court order. The Divisional Police Commander and the Regional Police commander had no knowledge of this military presence, the police had already been to the town and had kept peace and tranquility until that evening when they came. Their presence terrified the ordinary citizen and the fear sent many running away in to bush. Hon. Mireku Duker, before the presence of the military, had swept away to safety, all his family members to another town. It is therefore clear that whatever was going to happen to the ordinary citizen did not matter to him. He was only pretending.

3. Even though some of our clan members have been brutalized, Nana Nyonwa Panyin IV and his clan members, the Abusua Panyin and the accredited Kingmakers, respecting the ‘rule of law, had followed and obeyed instruction from the police and court and had managed to stay calm and not retaliate against all that the purported chief, his militants and these honourables had been doing.

4. Nana Nyonwa Panyin IV, the Abusua Panyin, the Acredited King-makers and the entire Agona Royal Clan would like to use this opportunity to thank the I.G.P, The Western Regional Commander, The Tarkwa Divisional Commander and the Nsuaem District Commander, as well as the Dompem station officer of Police, for following all the court proceedings and granting us protection against such brutalities all this while.

5. We know that traditionally, in Ghana, the MP and MCE are not to meddle in the affairs of chieftaincy, and that they are not the ones to enstool a chief, behind whom they are solidly standing. We ask humbly, that the president advises these Honourables to desist from what they are doing, for in effect, their actions are likely to tarnish the respected image of Nana Akufo Addo

6. In the event of any chaos in Dompim Pepesa, we suggest, that the president of the Republic should hold The Western Regional Minister, The Member of Parliament and Municipal Chief Executive of Tarkwa-Nsauem Municipality responsible.

7. The illegal chief, who shot a gun at the baliff was been charged to court, but the Regional Minister ordered that he should not be taken to court.

8. This is not strange, because it is believed that acid poured out on some members of the Nyonwah family and the guns which he (the purported chief and his militants) used were given him by the MP. The court issued a bench warrant to arrest those who did such atrocities, but the MP prevented their arrest, and now those culprits are walking freely in town, saying, ‘as far as Hon Mireku Duker and the Western Regional Minister remain at post, no one can arrest them.

9. As for the military we are thinking of taking legal action against their High Command in Takoradi.

One again we thank the police, and now we wish to sincerely thank the all the media houses that have been here to listen to us.

We also wish to say a big thank you to Nananom of Wasa Fiase Traditional Area under which Dompim Pepesa falls. Thank you all.